Minecraft Wiki
Register
Don't have an account?
Sign In
Advertisement
in: Opaque Blocks, Renewable, Pages where template include size is exceeded,
and 10 more
English

The Anvil is an interactive block used to repair items, rename a certain block or item, or combine enchantments on items. It can also be used in traps, as it is affected by gravity and will do damage if it hits a player or other entity.

Anvils have three states of damage: normal anvil, slightly damaged anvil, and very damaged anvil. Whenever the anvil is used, it has a 12% chance of being damaged.

Also, dropping the anvil onto any solid block has a chance to also do damage to it; specifically, 5% times the number of blocks fallen, meaning that it will always be damaged after a 20-block fall. Despite being able to fall, it could not not be pushed by pistons in earlier versions of the game.

Damaged anvils tend to generate in a woodland mansion.

A total of 31 Iron Ingots, including 27 for three blocks of iron, are required to craft an anvil.

An Anvil requires a pickaxe to harvest, otherwise, it will drop nothing.

Anvils are special interactive blocks. They have two modes to repair items that have a durability rating:

Also, the player can rename any item – not just those with durability – by using an anvil.

Enchanted Books are used to enchant tools, and an anvil is needed to combine them with tools and armor.

You need to have 39 levels to be able to repair an item with lots of enchantments, if the requirement is more than your current level, the required livel text will be in red instead of green and you can't repair/rename the item (Survival and adventure mode only.)

If you repair an item 5 times, the anvil will no longer repair it; the price has gone up too high. 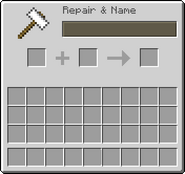