Chests; can be collected from oak trees; Killing Notch on SMP (older versions), Trading with villagers

The apple is a type of food item that refills

. Apples were introduced to Minecraft in Indev 0.31. Originally, apples were valuable items that were rarely found only in dungeon chests. Later in the game, they could come from being dropped by leaves off of oak trees (0.5%). Apples can be crafted into golden apples and into Notch apples, the latter being uncraftable in all versions as of 1.9. 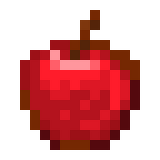 The newest texture of an apple. 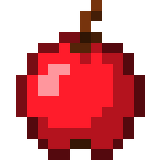