Minecraft Wiki
Register
Don't have an account?
Sign In
Advertisement
in: Luminous Blocks, Opaque Blocks, Pages where template include size is exceeded,
and 8 more

The beacon is a block added in the 1.4.2 "Pretty Scary Update". These blocks emit a beam straight up into the sky, visible from a considerable distance away which makes it a very good item to be able to find where you are when lost. They also have the ability to grant status effects to players in the vicinity.

Beacons, when placed on the top of a pyramid made of either iron, gold, diamond, emerald, or netherite blocks can grant the player status effects for eight seconds, but these effects will last infinitely if a player remains in the range of the beacon. Beacons also shoot a beam of light up into the sky that can help with navigating the world when active.

Any accepted block type can be used in any layer, regardless of what the other layers are made of.

Beacons can only function when they are placed on the top of a pyramid, and when not being blocked by a solid block on top of the beacon. The GUI consists of a primary, and secondary effect selection screen, a material acceptance selection header, and a player's inventory. A player must place the material (iron ingots, gold ingots, diamonds, emeralds, or netherite ingots) in the header to activate the effects. When the material is placed, a player is free to choose an effect located in the primary effect screen. Whenever a player is in range of the pyramid, a player will receive the effect. The effect(s) last forever, as long as a player is in range, wearing off 10 seconds after moving out of range. The selection and strength of the effects are enhanced by each layer added to the pyramid, along with the range of the beacon. Primary effects are speed, haste, resistance, jump boost, and strength. Regeneration is a secondary power.

The crafting recipe for this block is 3 obsidian, 5 glass blocks, and one nether star, the last of which is only obtainable by killing the Wither.

If a player opens the beacon's menu with their "use" action, the player can insert an iron ingot, gold ingot, diamond, emerald, or netherite ingot and activate a status effect for the beacon to bestow upon nearby players. The chosen effect will be re-applied to nearby players every 4 seconds if they are in the range of the beacon. The status effects which a player may choose from are as follows: 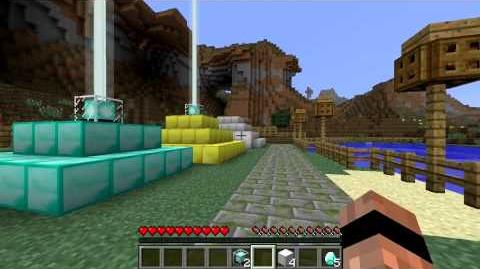