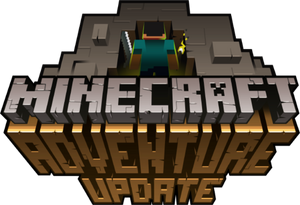 The Adventure Update was an immense update to Minecraft: Java Edition that focused on fighting, exploration, and adventuring among other aspects. It was released in two separate increments in September and November 2011: Beta 1.8 and 1.0, the latter being the full official release of the game. The features of this update were originally planned to be released in Beta 1.7, but it was later postponed due to its size.