Minecraft Wiki
Register
Don't have an account?
Sign In
Advertisement
in: Not Stackable, Renewable, Items,
and 5 more
English

minecraft:bow
A Bow is one of five weapons (the others being the sword, axe, crossbow, and trident) that can be crafted or found in Minecraft. It functions as the primary ranged weapon for the Player (and the only one, aside from Crossbows and Tridents that damages entities), giving them a preferred ranged method of attack over the sword.

A bow is an item that can be used to attack mobs, using the arrows in the inventory. To fire the bow, hold down right-click to charge the shot, then release to fire. A bow can be used 385 times before it breaks. The damage and range depending on how far back the arrow was drawn. For best results, shoot at maximum charge. A fully charged bow can be identified in two ways. First, the bow is fully charged when it stops the drawing animation and begins shaking, or the bow's arrow, when shot, will leave a particle trail, much like that of a critical hit when jumping and attacking with a sword.

The bow is best used to take on mobs at a distance, or where sword attacks could endanger a player (such as engaging Creepers, Skeletons, or Strays). The bow is a good way to attack skeletons while swimming because the skeleton's bow will knock them back causing the player to have a hard time getting to them.

When fighting a creeper or another mob, try to hit the block beneath it so one can keep a distance as aiming at the torso will slow one down and allow the said mob to advance. Shooting from above ledges is the most effective way to kill mobs and/or a player, However, when aiming, stay close to the edge and sneak falling off the edge isn't a risk. Bows are best used when fighting range attack mobs such as skeletons. The further back the bow is pulled, the further the arrow will go.

Bows are an excellent initiator or full-length combat weapon if the opposing player lacks one. The bow starts to lose its significance quickly when the opponent equips armor. When shooting atop of a platform, the bow user has the upper hand. However, on solid ground, sword users can easily run them down. However, to a person trying to cross a river or other body of water, a bow is a tough opponent. To enhance the abilities of the bow, enchanting the bow is a must-have in PvP unless it is simply a defensive weapon in the defense of towers, walls, etc.

As of 1.2.5, enchantments have been added to bows, including Power, Flame, Infinity, Punch, and Unbreaking. 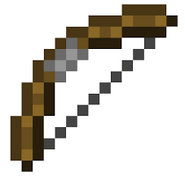