Minecraft Wiki
Register
Don't have an account?
Sign In
Advertisement
in: Opaque Blocks, Renewable, Pages where template include size is exceeded,
and 10 more

Chests are blocks used to store items and other materials. In very rare instances, chests can also occur inside of walls and under floors in dungeons. The contents of these chests are similar to those of normal un-hidden chests. When chests occur in strongholds, they are surrounded by stone slabs and stone bricks.

It's possible to make triple chests by using the command /setblock. However, performing this action will cause a little bug in the chest inventory that will cause the normal inventory to (where one carries their items when they don't have space for the 9-slot inventory) become glitched, which can make the selection buggy.

To perform these actions, stand beside a double chest and use the command: /setblock ~ ~ ~ chest.

For some reason, triple chests do not look like a real triple chest. They look like normal double chests. Even though one can still select it, one cannot select the third chest that they've placed.

A small chest has 27 slots of inventory space, and a double chest has 54 slots. A chest cannot be opened if there is an opaque block above it, nor can a chest be opened while an Ocelot or cat is sitting on them.

Piglins become hostile towards players who open or mine chests.

Chests can be placed under Note Blocks to produce the "bass" sound.

A Chest can be harvested with any tool or by hand, but an axe is the fastest. 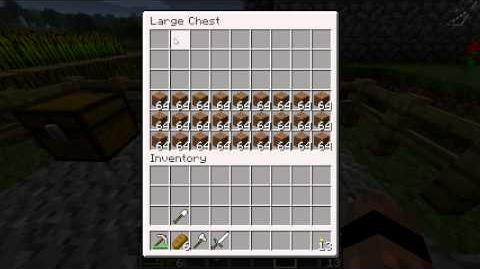