Minecraft Wiki
Register
Don't have an account?
Sign In
Advertisement
in: Renewable, Not Yet Released, Items,
and 5 more

Telling the time of day

A Clock is an item that tells the time by displaying the current in-game position of the sun and the moon. They only function properly in the Overworld.

The clock dial has two halves, a day side and a night side. The dial spins clockwise slowly to indicate the time of day, corresponding to the sun or moon's actual position in the sky. The dial can be read in a player's hand, placed in an inventory or crafting grid, in an item frame, and even as a dropped item.

Since there is no day-night cycle in The Nether or The End, clocks do not work in those dimensions and instead will rotate rapidly and randomly.

Piglins are attracted to clocks and run toward any clock on the ground, and inspect for 6 to 8 seconds before putting it in their inventory. 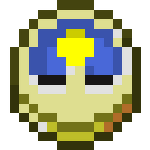 The clock can be useful, if put in an Item Frame
Community content is available under CC-BY-SA unless otherwise noted.
Advertisement