Minecraft Wiki
Register
Don't have an account?
Sign In
Advertisement
in: Flammable, Opaque Blocks, Pages where template include size is exceeded,
and 6 more

Cobwebs are a placeable item that was added in Beta 1.5. They only appear naturally in abandoned mineshafts, stronghold libraries or Abandoned Villages. Cobwebs were previously found in the terrain.png file but had no block ID assigned to it. They were officially added in Beta 1.8 and generated in abandoned mineshafts. Cobwebs are also flammable, but they can't be ignited by burning blocks nearby. It currently has no use, for using it with a crafting table has no effect, nor is it craftable from string, an item that cobwebs drop. Cobwebs can be broken with the player's hand, but this does take a very long time, especially if a player is stuck in one. Cobwebs can be broken much faster with a sword or shears, but this deals double durability points to the sword. Using the sword will drop string while using the shears will drop the cobweb itself.

Moving into a cobweb limits a player's movement abilities. When they are inside the cobweb, players will move at a speed equal to about 15% of the normal walking speed. Additionally, jumping will be akin to jumping in a two block high space. Dropping an item into it will make the item stick and gradually sink through it. Like water, falling into a cobweb will prevent fall damage from the ground. This property of the block makes it ideal for players wishing to make redstone "timers." By having a dispenser put an item out, the item will gradually fall onto a pressure plate and activate the next circuit or some other device. More cobwebs can be used to make the time longer. This is also useful for traps, the most common of which forces the entrapped above a lava pit, falling slowly to their death, while preventing them from dumping water onto the lava to put it out.

In the tutorial world TU12 for both Xbox 360 and PS3 editions of Minecraft, there are cobwebs near a regular spider spawner. Near those are a chest, which contains a music disc entitled "11", and a bow enchanted with Power V. However, this is outdated due to recent updates.

A Cobweb requires a sword or shears to harvest; otherwise it will drop nothing. Shears, or a Sword enchanted with Silk Touch is required to harvest the block. 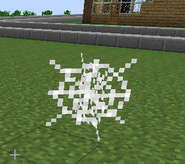 A cobweb outside for decoration. 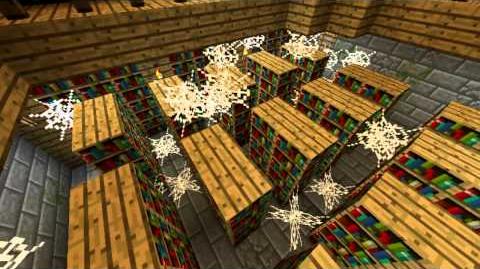