Minecraft Wiki
Register
Don't have an account?
Sign In
Advertisement
in: Luminous Blocks, Opaque Blocks, Pages where template include size is exceeded,
and 9 more

Conduits are light-emitting artificial blocks that can be used in a very similar way to beacons. They do not have a generated area. It was added in 1.13 - The Update Aquatic.

Conduits are activated when at least 16 blocks of prismarine, dark prismarine, prismarine bricks, or sea lanterns are put around it in either a cube or many other ways. When activated, the conduit opens and reveals the texture of the heart of the sea in the middle.

When the conduit is surrounded by 42 prismarine related blocks, the texture will change to the texture of the conduit power status effect and have a maximum effective distance of 96 blocks, or 16 blocks of range for every 7 blocks in the frame, however, there are many stand positions that can activate it. If a hostile mob goes toward a fully framed conduit, it will take two hearts of damage every two seconds within a range of the conduit. Conduits are an underwater-only block; if a player attempts to place it above water, it will not have any much effect and it will only be a mere light source on land. If the player leaves the water, the conduit power given will last the rest of the 10 seconds unless it is raining. Conduits are great for underwater mining and fighting drowned and guardians.

A conduit can be crafted with a heart of the sea in the middle slot, filling up the rest of the crafting table with nautilus shells.

Within the range of the conduit, the player will receive the conduit power status effect which will supply the player with haste, increased underwater vision and will prevent the oxygen bar from going down. 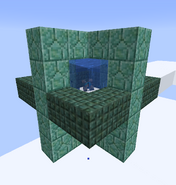 Drowned was killed by conduit.

An activated conduit in Bedrock Edition.