Crafting is a game mechanic in Minecraft that allows players to place materials in a grid to create different items and blocks necessary for survival.

Once a player constructs a crafting table using wood planks (one wooden plank in each crafting box), they are able to construct more advanced items/blocks such as tools, armor, chests, and furnaces. The crafting table has a larger 3x3 crafting grid and the ability to create tools and weapons. Some items/blocks take more time and effort to gather resources than others. For example, a diamond sword takes much longer to obtain the materials to craft than a wooden sword.

In order to craft objects successfully, a player must make a shape of the desired object in the crafting grid. When a player has successfully arranged the right materials in the right positions within the grid, the object to be produced will appear in a separate single box of the crafting interface, where a player may pick it up and place it in their inventory. In the Minecraft: Xbox 360 Edition, Minecraft: Xbox One Edition, and Minecraft: Bedrock Edition, the interface tells you all the ingredients needed to craft the object in question. In the PC version a player had to find out the recipes on their own without the recipe book, until the recipe book was added to PC in the 1.12 update. In the Xbox 360 and Xbox One editions, there is an option for "classic crafting" which makes the crafting interface more like the PC version's crafting interface when enabled.

A crafting table is the main tool for crafting. It is nearly impossible to succeed in Minecraft without the use of a crafting table as it is needed to create pickaxes, armor, weapons, furnaces and other necessary items/blocks.

In the Minecraft: PlayStation 4 Edition and other console editions, the items needed to craft an object are displayed in the crafting grid without the need for recipes. This makes the crafting grid more of a visual 'ingredient' list. This was likely added so that casual players could enjoy the game without spending a lot of time learning recipes as well as to lessen the already-high learning curve. Another possibility is that it is difficult to quickly move items around the inventory crafting grid by using a controller alone (even with the touch-pad, it is still not as easy as using a computer mouse). 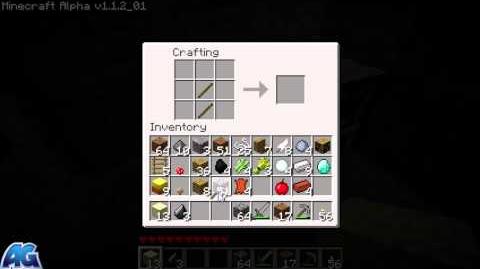