A crafting table is a utility block used to craft items within a 3×3 grid. When it is used, it allows a player to access the crafting grid.

Pressing use on a crafting table will open the 3×3 crafting grid that allows the player to craft many more items than are available in the inventory crafting grid, which is only 2×2.

Crafting tables can be used as fuel in furnaces, smelting for 1.5 operations.

Crafting tables can also be used to repair damaged tools, weapons, and armor. This is done by combining two damaged items of the same material side-by-side in the crafting grid. This method of repair does not require any experience but removes any enchantments on either or both items.

A Crafting Table can be harvested with any tool or by hand, but an axe is the fastest.

A player's inventory with a 2x2 grid in the top right corner where it says "Crafting".

The interface of a crafting table in Minecraft PE 0.8.0 (it uses the MATTIS system).

Console crafting interface. Can be changed to classic crafting in User Interface. 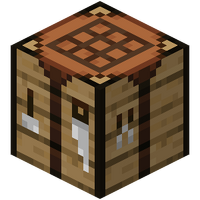