Creepers tend to sneak up to the players, and explode. (They will also explode mobs that provoke it.)

Music Discs (When killed by a skeleton)

Overworld (where light level is 7 or less, but not on transparent blocks)

minecraft:creeper
Creepers in Minecraft are one of the most unique and iconic hostile mobs found within the game. A creeper can easily be recognized by its tall vertical structure (roughly the size of a player), its pixelated body covered in a range of greens to whites, and its four legs. It is one of the most dangerous mobs in the game, as it is not affected by sunlight like zombies and skeletons (but it can despawn after a while if you stay very far from it) and will always remain hostile (unlike the spider, which becomes neutral in daylight). This makes it a constant threat as it silently roams the map, searching for an unknowing player to explode upon. It should be noted, however, that most creepers do despawn during the day, along with spiders. It is often used as the game's mascot by Mojang.

The creeper was accidentally created by Notch, the creator of Minecraft. While Notch was trying to create the first-ever passive mob, the pig, a coding mistake was made, and he accidentally swapped the height and lengths of the pig's build. As a result, he got a tall, slim being with the face and torso in the shape of a player instead of a pig. With no arms and 4 stubby legs, this creature became known as the creeper, a mob that explodes within a distance from the player. It is one of the most recognizable Minecraft mobs and characters, another example being Steve.

A creeper who has sighted a player within 16 blocks will creep up on that player until the distance between them is only a few blocks. It should be noted that creepers tend to walk to the right of a player. The creeper makes use of a suicide-bomb-like attack involving getting within close proximity of a player (usually 2-3 blocks) before exploding. A player's only warning to when the creeper is about to explode is a very distinctive hiss, as well as the swelling and white flashing of the creeper itself (similar to the animation by a lighted TNT), which starts about 1-2 seconds prior to the explosion. If a player tries moving away when a creeper is hissing, it will cancel the detonation; however, the harder the difficulty, the further away a player has to get. It takes three full seconds for the creeper to detonate. After it explodes, it will leave a large crater in the ground, ejecting all of it's shell and equipment to cause further damage. The size of this crater is solely dependent on what the terrain is made from. Typically, a hole in the topsoil is created; however, they can be powerful enough to destroy stone. A creeper's explosion won't create a crater if the creeper is in a water source, but it can still damage nearby mobs.

When a creeper is killed by an arrow shot by a skeleton, it will drop a random music disc, which can be played in a jukebox. It doesn't matter what dealt most of the damage, as long as the last blow was the arrow of a skeleton. Creepers cannot use doors although they can climb ladders and vines despite not having any arms, being the only hostile mob who can do this.

If a creeper has been inflicted with a status effect, it will leave that effect behind on the ground, similar to lingering potions.

Creeper drop 0-2 gunpowder, which is used to craft TNT, but only when killed from damage caused by players. A creeper who is killed by its own explosion drops nothing.[1]

If struck with lightning, a creeper will become a "Charged Creeper". Charged creepers are stronger, and they have a larger blast radius than a normal creeper. They also have a visible, electric aura surrounding them.

Creepers can be somewhat formidable foes when encountered as their stealth gives them the upper hand. Creepers are slow, and they will also reverse their detonation time if a player leaves their range. This can be used to a player's advantage in melee combat. A player can simply hit the creeper with their sword and then quickly back away before the creeper detonates which lets a player get at least two hits in before having to retreat. If this process is repeated, a creeper can be easily defeated. This is easily done by all players, even those who have started a new world.

The most effective and safest way to eliminate a creeper is to simply use a bow as ranged combat will surmount the creeper's slow speed. A player would need at least three arrows with a regular bow; however, this can be minimized with enchantments. Another effective way is to light the ground on fire with a flint and steel and lead the creeper up to it, or simply right-click the creeper and detonate it, but the player must run away as the detonation will not be cancelled if done by this method, and if the player chooses this strategy they will gain nothing, as creepers don't drop gunpowder when they explode. A player may also use a shield if they find themselves cornered. However, they must block at the right time, since the player will most likely die if they block too late.

It's very important you have a cat or Ocelot with you, since the Creeper will not blow you up if your near one, because Creepers are scared of cats and Ocelots.

Creepers - Minecraft Micro Guide
The first video in this gallery. 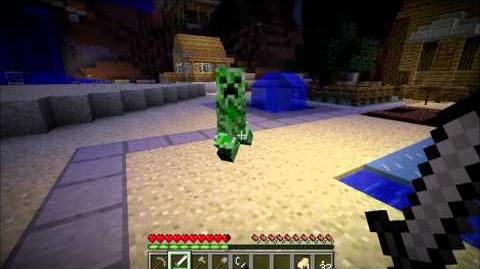 Minecraft Mobs Creeper
The second video in this gallery. 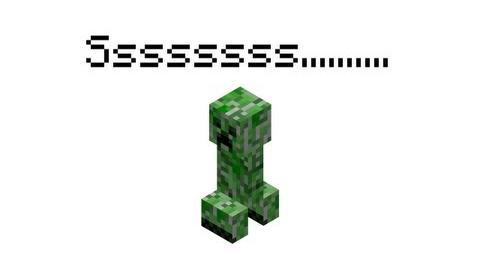