minecraft:egg
Eggs are throwable items added in the 7th Secret Friday Update, obtained only from chickens and villagers. They are laid by chickens every 5-10 minutes (takes 40 minutes for 9 chickens to lay 50 eggs, so it takes, on average, 7.2 minutes per egg).

During the Beta update (20 December 2010), eggs were made throwable at the request of a fan.[1] When thrown, eggs have the same on-hit effect as Snowballs and additionally have a 1/8 chance of spawning a baby chicken which will grow up in 2-3 Minecraft days. Alternatively, eggs can be used as a projectile. They can be placed in Dispensers and fired upon activation. Like snowballs, eggs don't inflict any damage upon their target.

Farmer Villagers will buy eggs in exchange for Emeralds. 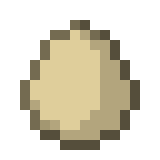 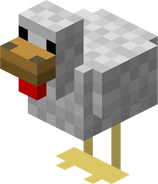