Minecraft Wiki
Register
Don't have an account?
Sign In
Advertisement
in: Opaque Blocks, Renewable, Pages where template include size is exceeded,
and 7 more
English

For a block that looks similar to glowstone, see Shroomlight.

Glowstone is a light source block that emits a light level of 15. Glowstone can only be found naturally in the Nether, generating in clusters on the undersides of netherrack ceilings and in bastion remnants. Glowstone can also be obtained through trading with wandering traders. In Java Edition, journeyman-level Cleric villagers sell one glowstone for four emeralds. Glowstone can be crafted using four glowstone dust.

Players can also use a pickaxe with the silk touch enchantment to get the glowstone block itself.

Breaking glowstone drops glowstone dust, which is used to re-craft the glowstone blocks. Unlike torches, it isn't destroyed by water and continues to emit light even when submerged, similar to Jack o' lanterns and sea lanterns. Like all non-sunlight light sources, glowstone blocks will cause nearby snow and ice to melt. 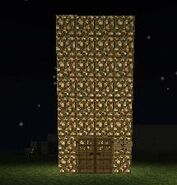 A tower made out of glowstone.