Minecraft Wiki
Register
Don't have an account?
Sign In
Advertisement
in: Not Stackable, Renewable, Items,
and 4 more

A hoe is a tool that is most commonly used for farming. When the player presses right-click (right trigger on console editions) on Dirt or Grass, the hoe plows that block into farmland. Players can plant seeds to grow Wheat, Melons, Pumpkins, and other crops on it. The hoe is the only tool that has inflicts the same damage no matter what material it is crafted from.

The hoe is used to till Dirt and Grass into farmland for producing (growing) Wheat, Melons, or Pumpkins. There is a misguided belief that gold hoes instantly create fertile (watered) farmland, but this is not true. When dirt is tilled by a Water source block, any tilled dirt at least 4 blocks away will become fertile (again, watered). This information can be used to make very efficient gardens. To do so, put a water source into the ground and till the dirt 4 blocks on each side. Then, make a "cube" of tilled dirt then till all the remaining dirt. Doing this will make all the dirt fertile, making crops grow much faster, and produce more crops. Unlike other Tools, hoes do not increase damage dealt in combat, nor do they lose Durability when used to hit a mob or break a block.

Note: Tilled dirt turns into normal dirt if one jumps on it or if water gets on it. To convert back to tilled dirt, simply use the hoe to convert the land back to farmland.

Hoes can be enchanted with efficiency, fortune, mending, and unbreaking 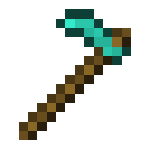 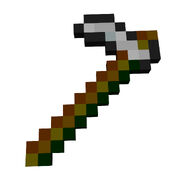 A player made hoe and a hoe