Minecraft Wiki
Register
Don't have an account?
Sign In
Advertisement
in: Transparent Blocks, Renewable, Pages where template include size is exceeded,
and 2 more

Ice is a partially-transparent block that forms over water in colder biomes, and is somewhat slippery.

The presence of ice can be used as an indicator of tundra, taiga, or ice plains spikes biome. A player can break an ice block without a tool but will do so faster with a Pickaxe. Ice is very similar to snow, in the sense that it melts when it comes into proximity of highly luminous blocks.

Ice produces a "slippery" effect when moving across its surface. Players can sprint faster across the ice, than other surfaces. Entities and items may slide a distance across a patch of ice.

Ice does not commonly have use and was most likely implemented in Minecraft for show and visual effect. Ice cannot naturally be gathered. However, if a pickaxe has the Silk Touch enchantment, ice can successfully be gathered without being destroyed.

Ice can be used to make traps but is not efficient in this as water makes a better substitute in moving mobs. Melted ice will disappear in the Nether.

In mob traps, ice is great for making faster mob delivery systems. Water traveling over ice propels items and mobs faster, decreasing the amount of time a player must wait.

Ice can be mined with any tool or by hand, but a pickaxe is the fastest. The block will only drop when mined with a pickaxe enchanted with Silk Touch. 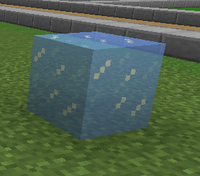