The Inventory is the pop-up menu that a player uses to manage items they carry. From this screen, a player can equip armor, craft items on a 2x2 grid, and equip tools, blocks, and items on the Hotbar displayed at the bottom of the screen. A player's Minecraft skin is displayed here as well.

The inventory is opened and closed by pressing the E key by default, which can be changed from the in-game options menu.

on the Xbox 360 and Xbox One, the X button on the Wii U, and the ••• button on mobile devices will all open the inventory. The Esc key also closes the inventory on PC.

Crafting is done in the 2×2 grid on PC, but in the console editions, players can choose whether to have a simplified crafting interface that is separate which means that it's not in the inventory or being able to craft in the inventory like on the PC version. This can be accomplished by changing a players options. In the PlayStation 3, PlayStation 4, Xbox 360 and Xbox One editions, a cursor feature is also available.

The inventory consists of 4 armor slots, 27 storage slots, and 9 hotkey slots (this group of slots is sometimes called the "Hotbar" or "quick-access bar"). Items in the hotkey slots can be selected during gameplay using the keyboard (keys 1-9) or mouse wheel, placed, or wielded with the mouse buttons on PC. On PS3 this bar is scrolled through with R1 and L1, and items are placed or wielded with R2 and L2. As of update 1.9, there is also an off-hand slot for a Shield.

Some items stack up to a maximum of 64 in one slot. Blocks and most food items are stackable but tools (with the exception of clocks and compasses) are not. Snowballs, eggs, signs and Ender Pearls are special and can only stack up to 16. To split a stack, right-click the stack (in PC), press

on Xbox. This leaves half the stack on the square and allows a player to move the other half. Conversely, while holding a stack in the inventory, Right-Click/

can be used to place just one item anywhere on the inventory grid.

One way to organize and craft items is by holding Lshift (on PC), pressing

(on Xbox) and clicking on the item; doing so will change the item's position to the Hotbar, the inventory slots, to the armor slots if the item can be worn by a player or if the item is stackable, it will stack along with other equal items. Moreover, holding Lshift and clicking on an item/pressing circle while a chest is open will immediately move the item(s) into the chest. Also, if a player Lshift (PC), clicks/presses

(Xbox) on an item in the chest, the stack will enter their inventory. These features are collectively called quick move on PS3/Xbox, and also allow quick movement of items to Furnaces, Anvils, Brewing Stands and Enchantment Tables in the same way as chests, but only for items that can be used in them.

Items can be dropped into the world by clicking outside the inventory window while holding items, by closing the inventory with items either held or placed in the 2x2 crafting grid or by pressing Q (default on PC),

(PS3). Items dropped in the game world will disappear after 5 minutes if not collected, but items placed using the right mouse button will not. Chests can be used to extend a player's inventory space, but they must be placed in the game world before they can be used. Armor is only considered equipped when it is in an armor slot; when in any of the regular inventory slots, it is not considered "worn" and does not offer protection. Inventory is saved on multiplayer servers, so that players' personal inventory, chests, etc. are saved when they leave, allowing players to continue where they left off. Items have "tooltips" displaying their name if the cursor is hovered over the item.

In Creative Mode, the inventory contains all blocks and items from survival, along with others that can't be found, like spawn eggs. A player can pick up blocks from here to use endlessly or drop things right in the menu to remove them. Clicking on something more than once will give them a stack of that block or item. Right-clicking a block or item will give a player a full-stack. The Creative mode inventory menu is sorted into 10 sections labeled on tabs: 'Building Blocks', 'Decoration Blocks', 'Redstone', 'Transportation', 'Miscellaneous', 'Foodstuffs', 'Tools', 'Combat', 'Brewing', and 'Materials'. There is also a search box and a survival inventory tab. In PS3 the creative mode inventory is the normal inventory, and the Creative mode item list is instead accessed through the creative mode interface, which replaces the crafting interface in Creative mode. 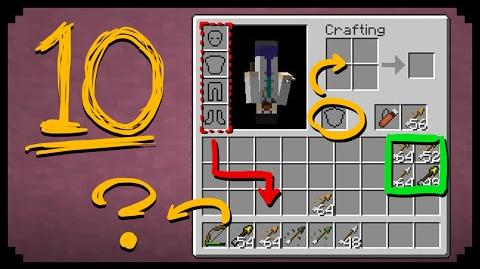 ✔ Minecraft 10 Things You Didn't Know About the Inventory
Community content is available under CC-BY-SA unless otherwise noted.
Advertisement