Villages
Pillager Outposts (Inside Cages)
Built by a player

For a list of iron-related objects in Minecraft, see Iron (Disambiguation).

Iron Golem is a tough, utility mob that are immune to drowning, fall damage, and knockback. They are built with four blocks of iron and a carved pumpkin. Iron golems are considered one of the strongest mobs and one of the most dangerous in the game, as they will not be knocked back by any means. Before 1.14, they spawned in villages with at least 21 doors and 10 villagers. After 1.14, they spawn based on villager gossip at a gathering point or through the "Panic" level of at least 3 villagers each with their beds and workstations.

Villagers can summon iron golems, either when they are gossiping or panicking. If a villager tries to summon a golem, up to 10 attempts are made to spawn a single golem in a 16×13×16 space, with the center is the villager (+7/-8 blocks along x/z axis and +6/-6 blocks along the y-axis). A random y column is picked, and the topmost block in that column is selected that is air, water, or lava, has a solid blocking block underneath. If none meet required, a block at y=+6 is picked instead. The target location then checked whether the block underneath has a solid top surface, and the target block with 2 blocks above must not be full, be redstone-powered, nor rails, and the two blocks above must not be water. This means the golem can spawn inside one-block deep water or inside blocks like slabs, fences, and carpets. Adjacent blocks are irrelevant, so the golem can even spawn inside adjacent solid blocks resulting in their suffocation and death, but the spawning still must not collide with any existing entities.[Java Edition only]

An iron golem can spawn naturally when a village first generates in the world. Golems can also spawn in villages having at least 20 beds and 10 villagers, in a 16×6×16 volume around the village center defined by a bed, a bell, or a meeting point. To spawn golems, 75% of the villagers must have worked in the past day and 100% of them must be linked to a bed. A player also required, must be within 80 blocks of the village horizontally and within 44 blocks vertically. If all the conditions are met, then every average 35 secs (1/700 per tick), golems can spawn. They spawn provided the 2×4×2 space above the spawn point (horizontally centered on the NW corner of the block it spawn on) contains only non-solid blocks, and the blocks it spawn on is solid.[Bedrock Edition only]

Iron golems are created by placing four iron blocks in a T shape (as shown in the image), and then placing any type of pumpkin, with the excluding of the uncarved one[Java Edition only]. The pumpkin can be placed by any method, but it must be placed last. It needs space around it to be able to spawn and cannot spawn in a confined area. When successfully transformed, it is naturally passive to the player who created it. It can also attack the player's tamed wolf, if punched accidentally, but it will not directly attack the player. The block arrangement can be placed upright, lying down, or upside down. The four empty spaces in the diagram must be air blocks. Any non-air block present in any of the empty spaces prevent the golem from spawning. Like other constructed mobs, iron golems always spawn facing south. Their large size may cause them to take suffocation damage from nearby solid blocks at the level of their head.

To create a cracked iron golem, create an iron golem and shoot it with a firework from a crossbow.

Iron golems can also be found surrounding pillager outposts, trapped inside of any dark oak cages around the outpost tower, with the spawning chances in each cage is 50%. If freed, they can help the player by attacking any nearby pillagers.

Iron golems will become aggressive against any nearby hostile or neutral mobs other than creepers or wolves. They will attack anything that attacks themselves or a villager, except a player if the iron golem is player-made. A golem will only stop acting aggressively if they defeat the player or mob who attacked them, or if all players leave the game. If the village is near a large pool of water or the ocean and an iron golem unknowingly goes in the water, it will sink and stay in the water until it is somehow forced to escape it. Iron golems can't drown or take fall damage. They may give baby villagers a poppy.

Iron golems drop 3–5 iron ingots and 0–2 poppies on death; however, when a player kills an iron golem, a player's popularity in a village will decrease by 10. If the popularity level is at or below -15, natural iron golems will try to attack and kill a player. This does not apply to player-made golems. The main reason the iron golem is considered a danger is that when players attack an iron golem, it will not take knockback damage, so players cannot time their attacks. Also, they do a tremendous amount of damage, taking away 14 (

x 7) without armour. There is also a large gap between their weakest attack damage and the strongest attack damage. They can potentially kill an unarmored player with their strongest attack. As previously stated, the iron golem will stop moving when submerged in water, so slaying it while it is on the surface of the water is recommended.

To create an iron golem, a player must place four iron blocks on the ground in a plus shape, then place any kind of pumpkin with a face on it (whether it is carved, or a jack o' lantern). This does not require a crafting table. 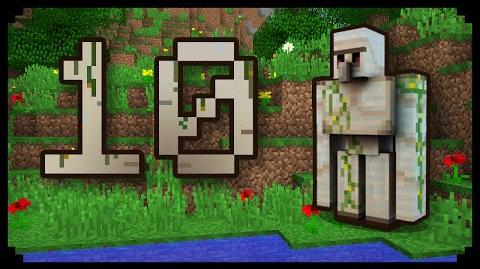 ✔ Minecraft 10 Things You Didn't Know About the Iron Golem-0