Extremely dense trees, bushes, and vines often surround a jungle temple, obscuring it from view. A jungle temple consists of three floors connected via staircase, traps, secret rooms and puzzles. It can contain up to two chests, like a dungeon. The temple contains two sets of stairs made of mossy stone bricks and broken stone bricks. On one side, there are three levers that open the hole to the first chest, and on the other side, there is a path with tripwires and dispensers.

The dispensers are covered up with vines, which makes them very difficult to see. They are also filled with many arrows that can kill a player if triggered excessively. One common way to disable these is to use shears to break the tripwire string. This disables the trap and makes it safe to reach the chest. Alternatively, if the flying arrows can be dodged, the arrows in the dispensers can be removed, rendering the trap useless.

Typical treasures that can be found in jungle temples are: 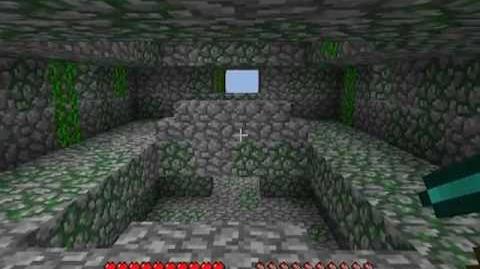