Minecraft Wiki
Register
Don't have an account?
Sign In
Advertisement
in: Opaque Blocks, Renewable, Pages where template include size is exceeded,
and 4 more

A Ladder is a wooden block used for climbing walls and blocks vertically.

Ladders allow a player to climb vertical surfaces. A player must place them vertically on a block. After it is placed, it can be climbed by pressing the 'forward' button while touching the ladder. Ladders can be built with 7 sticks, by building the form of a ladder in the Crafting Table. A player gets three ladders every time they craft it.

In order to craft a ladder, a player needs 7 sticks.

Ladders occur naturally in Strongholds, library rooms, and intersection rooms with a wooden ceiling. Ladders can also be found in NPC villages, specifically, in tall buildings and houses with roofs that have fence railings.

Like torches, a ladder occupies one block from the side on which it is placed and cannot be placed on glass, leaves, ice, or glowstone blocks. Unlike torches, however, they resist water and will create an air pocket, like Signs, meaning that they can be used in gravel elevators. They also resist lava and can be used instead of glass to let lava light shine through a ceiling. If a player places a ladder in lava or water just on the ground and not near a wall, the air pocket will be present, but invisible.

A Ladder can be harvested with any tool or by hand, but an axe is the fastest. 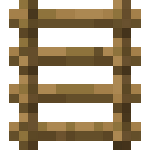