Ingredient for Potion of Fire Resistance

Magma Cream is an item in Minecraft that is dropped by Magma Cubes when killed, or by crafting. Unlike the Slime, which only drops Slimeballs from the tiny size, the small and medium sizes of magma cubes drop magma cream. Magma cubes drop 0-1 magma cream per small/medium magma cube, so the maximum amount is 10 without using the Looting enchantment. The other way to obtain magma cream is to craft it with a slimeball and Blaze Powder. This is a relatively inefficient way of obtaining magma cream since one needs to kill both Blazes in the Nether and slimes in the Overworld, making it a difficult task to accomplish.

Magma cream is used to brew Fire Resistance potions, which are essential if one decides to venture through the Nether or in a pool of Lava. Splash potions are also possible to brew with magma cream, but they require an extra pinch of Gunpowder.

Magma cream that has dropped from a slain magma cube.

How to craft a Magma Block 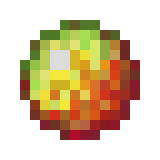