Minecraft Wiki
Register
Don't have an account?
Sign In
Advertisement
in: Not Stackable, Renewable, Items,
and 2 more

For a list of all map-related Minecraft topics, see Map (Disambiguation).

A map is an item that is used as a visual aid when exploring the Overworld or the End. It allows a player to capture surface features of areas they visit, plotting them on a hand-held map.

When held and right-clicked, a player will be displayed as a white pentagon-like shape on the map, with a small circle of the land surrounding it. The remaining part of the map is blank, meaning that it has been unexplored. As a player walks around the world, the map will be slowly filled in. However, it must be held while walking around.

When the map has been fully filled in, a map can be expanded placing it in the crafting table and surrounding it with Paper. A single map can be expanded up to four times. Once this has been done, a new map must be crafted in order for a player to continue "mapping" unexplored areas. A map can also be duplicated. This is done by placing a blank map beside a used map in a Crafting Table.

Buildings created by a player will show up on the map (only if it's 16 by 16 blocks minimum), but if any changes are made to the buildings, they will not be displayed on the map until a player revisits that location with the map in hand. A player can also walk around with the map in their hands, so when they look down, the map is brought up to full screen, and when they look up, the map is brought down. This way players can look at a map and explore at the same time.

In the PC version of Minecraft, a single map cannot possibly display the entire world, as a Minecraft world is potentially infinite. However, in the Xbox 360 and PS3 editions, a single map can cover the entire world. In all versions except Pi Edition, the map will display any and all players in the world and their locations. This feature was first introduced in Minecraft: Xbox 360 Edition and was later added into Minecraft Java Edition via update 1.5, and Also has been added to Bedrock Edition.

A map allows a player to easily find their way back to a location they had previously found. Maps locate only the surface locations. There are no markings for underground locations.

In multiplayer, players can use a map to locate other players who happen to be within the area that map covers, as they will also appear as icons on the map.

In The Update Aquatic, markers were added to the map interface, in the form of Banner icons. If a banner is renamed, an Anvil icon will appear on the map instead.

Maps can be mounted within an item frame and hung on a wall. The map will expand to fill the side of the block upon which the item frame is mounted. In this way, smaller-scale maps can be arranged to create larger mosaic maps. Clicking on a map while it is mounted on the wall will rotate it by 90 degrees.

An example of a Start Map that may be found in a Bonus Chest (seed in question is 2189910, and the circled areas are Ocean Monuments). 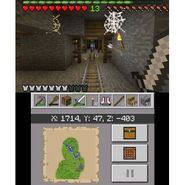 The bottom screen is used to display the map, along with the hotbar and Inventory, Crafting and Pause buttons. 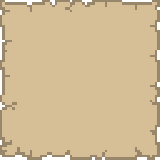 A map of the Overworld. 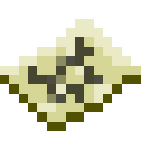 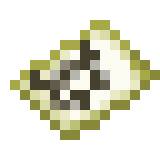 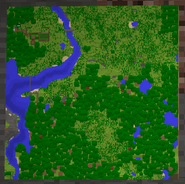 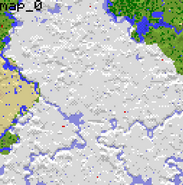 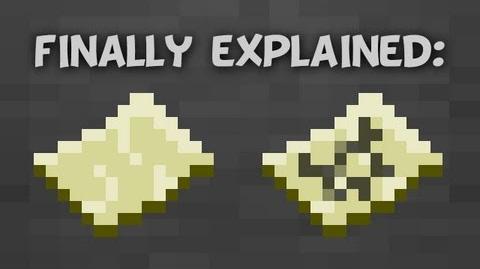