Markus Alexej "Notch" Persson is a Swedish video game programmer best known as the creator of Minecraft and the former owner of Mojang AB.

Markus Persson was born in Stockholm, Sweden but lived in Edsbyn for the first seven years of his life, before moving back to Stockholm with his family. He began programming on a Commodore 128 home computer at the age of seven. Having experimented with various type-in programs he produced his first game at the age of eight, a text-based adventure game. Professionally, he had worked as a game developer for King.com for over four years, until 2009. Afterwards he worked as a programmer for Jalbum. He is also one of the founders of Wurm Online, although he no longer works on this game. Outside of work, he has made seven games for competitions for the Java 4K Game Programming Contest such as "Left 4K Dead" and "Mega 4K Man". He has also entered the Ludum Dare competition. He is the central figure of a documentary in development about the rise of Minecraft and Mojang called Minecraft: The story of Mojang. Some fans believe he has a dead brother called Herobrine that haunts the game, but Markus has confirmed this is nothing more than a hoax, he never had a brother.

Markus was at one time married to Elin Zetterstrand (Kristoffer Zetterstrand's sister), for two years until August 16th, 2012, when he stated that he was single again.[2]

In September 2014, Markus and two other co-founders (Jakob Porser and Carl Manneh) left Mojang following their sale of the company to Microsoft for $2.5 billion (US).[3] Markus has stated the reason behind his departure from Mojang was in order to keep out of the limelight and preserve his sanity.[4] He has also spoken about how the success of Minecraft and being thrust into billionaire status has negatively impacted his personal life, causing him to often feel isolated [5]

Markus is presumed to now be living in the Trousdale Estates neighborhood of Beverly Hills, California, as he purchased a $70 million mansion in the neighborhood in 2014.

Games and other work

Notch has released almost all of his work. His newer games developed with Mojang include:

Notch's former Twitter avatar (while he worked for Mojang) 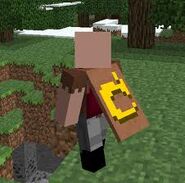