minecraft:name_tag
Name tags are items that can be used to name mobs by right-clicking on them. Name tags are not craftable, so the only way to legitimately obtain them in Survival is to find them inside of dungeon chests or strongholds, through trading, or by fishing.

Name tags must first be renamed with the use of an anvil before being applied to a mob (which, as of 1.8, costs 1 experience level, and on console editions, it costs 5). To use a name tag, simply hold the item and right-click on a mob to name it. Once done, the new name will display above the mob's head in a similar manner to a player's username. Once a mob is named, it can never be un-named, though its name can be replaced via another name tag.

Outside of naming mobs, name tags are useful for preventing mobs from despawning. Once a mob is named, it will remain in the world until it dies, regardless of the time or the player's distance from it. This makes it a great tool for hostile mobs (which can help in curing a zombie villager), which usually despawn during the day, or for neutral mobs and passive mobs, such as horses, in order to save them for a player to use no matter how far away they are or how long ago they were "rendered." 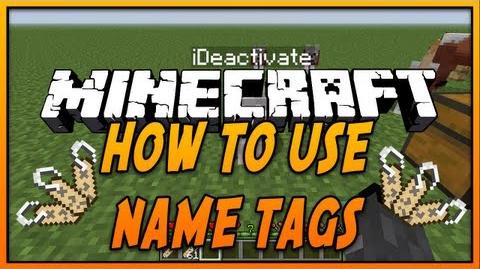