For articles on other pig-like creatures, see Pigs (Disambiguation).

The Piglin Brute (also called Brute) is a hostile mob added in Java Edition 1.16.2 and Bedrock Edition 1.16.20. It spawns in bastion remnants to protect chests. It wields a golden axe and will attack the player, even if they are wearing gold armor. It appears to wear dark clothes and gold accessories and has a scar over one eye.

A small amount of piglin brutes spawn in bastion remnants only upon generation and in some rooms, having no baby variant.

Piglin brutes spawn with no armor and holding an unenchanted golden axe, and never equips armor or items from the ground, showing that they are strong.

This mob is not scared of soul fire or its zombified counterparts, unlike the piglin. It also cannot be distracted by gold, unlike normal piglins. They only attack adult hoglins when they see other piglins attacking it. They are hostile to players, wither skeletons, and even the Wither. Like villagers and piglins, they can open wooden doors. They are also not fire-resistant. Piglin brutes will not run from zombified piglins or zoglins. If in the End or Overworld, they will transform into a zombified piglin within 15 seconds. They will be given the nausea effect for 10 seconds as well, but it has no effect on their health. 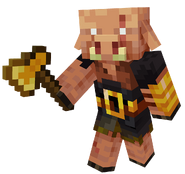 Preview of the Piglin Brute.

A Piglin Brute being zombified.