On foot, or by other usual means of travel

Village, Stronghold, Dungeon
A Plains Biome is a type of Biome of flat, grassy fields, commonly generated in the Overworld.

The plains biome is one of the most common biomes in Minecraft, and it holds several useful resources for players. An abundance of Flowers can be found here (necessary for making Dyes), widespread patches of Grass (which can be chopped down to gather seeds) as well as the occasional, sporadic Tree. The relatively flat landscape allows players to easily find level ground on which to build structures. Cows, Pigs, and Chickens spawn here more often than many other biomes. This is also one of the few areas where Horses can spawn. Villages often generate within this type of biome.

There are actually three or four variations of the plains biome: The normal plains (outlined in the paragraph above); a variation with slightly more hills and ponds of water throughout; a "sunflower plains" variation which contains fields covered in Sunflowers; and a "Wildflower Plains" variation containing many flower species other than sunflowers.

The plains biome is one of the easiest biomes for survival. Villages are common, and food is abundant with large amounts of passive mobs scattered around. Farming is relatively easy with common lakes for water, abundant grass for seeds and flat, fertile soil for growing. The only difficulty would be finding wood, but even that can be found with relative ease with some prospecting or settling near a bordering forest biome and can be grown in orchards after the player gathers enough saplings. As in mining, the player can build their own mine or wander down the occasional ravine or cave.

Plains with a village and Desert in the distance. 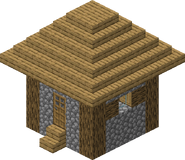 A house from a plains village
Community content is available under CC-BY-SA unless otherwise noted.
Advertisement