For other articles related to bears, see Bear (Disambiguation).

A polar bear is a neutral mob found in ice plains and ice plains spikes biomes.

Polar bears are neutral mobs unless they are around their cubs. At that point, they are hostile. Cubs themselves are passive, making polar bears the second mob to fall into all three behavior categories, along with the wolf. They spawn in cold and icy biomes, such as the tundra. Polar bears are also faster than a player when swimming. Even if a polar bear is provoked, all polar bears within a 41x21x41 block cuboid will instantly turn hostile towards the attacking player or mob (similar to zombie pigmen and wolves). Polar bears will also attack nearby foxes. Polar bears cannot breed, and the cubs' growth cannot be sped up. Like other baby animals, killing a baby polar bear yields no items or experience points.

A polar bear at night. 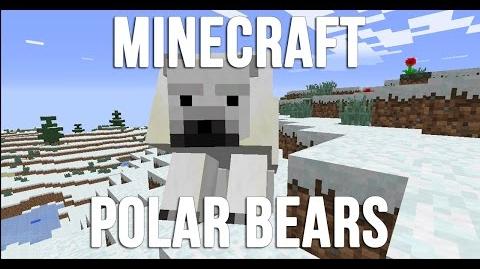