For other kinds of fish that can be found in Minecraft, see Fish (Disambiguation).

A pufferfish is a type of fish mob. It's easy to catch with a fishing rod in large bodies of water, can be obtained in Creative mode, killing its mob counterpart, and can be obtained from guardians and elder guardians.

When eaten, the pufferfish replenishes one Hunger point. (half a shank) However, it will give a player Nausea and Hunger III for 15 seconds, as well as Poison IV for 1 full minute. As consuming pufferfish evidently brings more harm than good, it is not an optimal source of food, unless a player drinks milk shortly after consumption.

Fisherman villagers will buy a pufferfish in exchange for an emerald.

Pufferfish can be used to brew the Water Breathing Potion, which grants a player the ability to breathe underwater for a limited time. 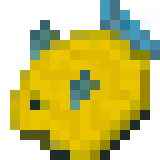 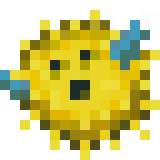 The updated version of the original Pufferfish texture.