Rabbits, and Foxes (if they are holding one).

A rabbit's foot is an item that has a small chance of being dropped by a rabbit or fox, holding one in its mouth when slain.

In the PC version of Minecraft, rabbit's feet drop rarely (10% chance). However, in the console editions of the game, a rabbit's foot is not rare at all since it can be dropped most of the time when a rabbit is killed by a player or a wolf. Tamed ocelots also have a chance to give the player a rabbit's foot as a gift.

A rabbit's foot currently only has one use, as a component used in brewing potions of leaping. Cleric villagers also have a chance to buy rabbit feet for emeralds. 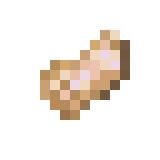