For other redstone-related objects found in Minecraft, see Redstone (Disambiguation).

A Redstone Lamp is a block visually resembling Glowstone (hence its crafting materials) that gives off light as long as it is powered. While powered, they have a luminescence like a torch and the same light level as glowstone (15). They require constant input in order to emit light (making them somewhat inefficient) from a Redstone current. Similar to other light-emitting blocks, they will melt snow and ice.

They Will Never Melt Packed Ice

A Redstone lamp will light if it is powered by a Redstone signal, or if it is next to a powered (solid) block. A Redstone lamp with a switch placed on it will behave just like a standard solid block, meaning that if a Redstone Lamp is powered, it will power the block adjacent to it. It will also power Redstone wire if it is placed on top of, underneath, or directly next to the lamp following the same principles as a standard solid block. Unlike glowstone, when a Redstone lamp is broken it will not break into Glowstone Dust or Redstone dust. Instead, it will yield one Redstone lamp, just like a standard block. It should also be noted that the lamps have not yet been optimized so a large number of blinking lights can cause FPS drops or even crashes.

A player may be tempted to use a Redstone lamp as a functional light source, however, unless a player is in peaceful mode, mobs will likely spawn in an unlit room (unless the flooring is half steps, in which mobs can't spawn). The fact that glowstone and torches emit light constantly makes them better lighting options. Redstone lamps can instead be used to create a Redstone display as an alternative for Redstone torches, which do not emit much light, a player creating such a display, however, should be aware that each "pixel" is a small cross making straight lines impossible. This can be corrected by making the screen two blocks (of any Redstone conducting block) thick. Then add levers or some be displayed. A system of Redstone lamps wired to a half-day clock can be used to illuminate a structure at night automatically as long as the clock is synchronized properly to spawning light levels of mobs. Because mobs can spawn on unlit lamps it makes them a great way to make a mob killing system because one can control when the mobs spawn by having the lights on or off. One can also hook up a bunch of lamps to a line of repeaters to make a timed light. Redstone lamps may also be used for automated mushroom farming since a mushroom will "pop" if the light level becomes too high.

Before Redstone lamps, Notch wanted to implement an item called the "Lantern", but the idea was scrapped and only later reemerged as the Redstone lamp, however, several differences exist between the two. With the addition, the lantern would serve as a permanent source of light. According to Notch, when the update would occur, all torches placed on the map, in the inventory, and in chests prior to the update would be converted to lanterns. To do this, the lanterns would use the (former) block ID of torches along with a re-skin. The glowstone introduced in the Halloween Update was a potential item required to craft lanterns, as it has the greatest luminescence as a raw material. This would also make lanterns relatively inaccessible and a risky item to get, as has been hinted at by Notch. A second potential item that might have been required to create lanterns was Netherrack since it is a block that never burns out while lit. These items can be obtained by going to the Nether.

Redstone lamps, originally called lanterns, were planned crafted objects originally planned to be introduced in the Halloween Update. This feature was delayed because of the lack of time and would have been implemented in a future update.

On November 11, 2010, on his Twitter account, Notch claimed (likely as a joke) that "lamps" had actually stood for "Light A-givin' Material Portal Side... the yellow stone thing", probably referring to glowstone. However, on January 13, 2011 Notch claimed that lanterns were "postponed", and added on January 20 that he was "not sure" when they would be implemented.

On the 12th of June, Notch also hinted at adding them, or at least that he's working on them. During Minecon when confronted about Lanterns, Notch said that lanterns were scrapped due to the majority of people preferring torches.

Later, Jeb started working on a Lantern-like idea that will feature a glowstone light source, but will be purely generational as their existence will not change the effects of torches like the Lantern was supposed to do. This idea will grow into the Redstone Lamp.

The redstone lamp was introduced in Snapshot 12w07a on February 15, 2012. Jeb passively announced the addition of Lamps in a tweet the day before its release in response to another tweet.

When first implemented, hooking a Redstone lamp up to a rapid-pulse will strobe the light, causing lag. This was fixed in 1.2.4.

A Redstone Lamp powered by a Redstone Torch. 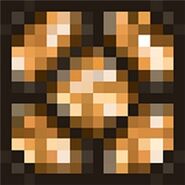 A creation made of Redstone lamps 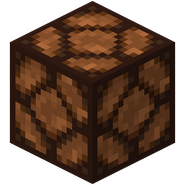