Minecraft Wiki
Register
Don't have an account?
Sign In
Advertisement
in: Opaque Blocks, Renewable, Pages where template include size is exceeded,
and 9 more

The respawn anchor - known as "The Bed of the Nether" - allows the player to set their spawn point in the Nether. It was added in Java Edition 1.16 "Nether Update" snapshot 20w12a.

Respawn Anchors can be charged with glowstone by using it with the block in hand – up to four charges are supported. Using it sets the player's spawn point to that location in The Nether. It can only be used in the Nether, as attempting to set one's spawn using this in the Overworld, The End, or custom dimensions will cause the block to explode – similar to when a bed is used in the Nether or The End.

Every time the player dies, a charge is used up. The amount of charges is indicated by a dial on the side of the block.

If a player's respawn anchor is destroyed, all of its charges have been exhausted, or if the area around it is unsuitable for respawning (i.e Lava surrounding it), a message is displayed reading "You have no home bed or charged respawn anchor, or it was obstructed”, and the player will respawn at the world spawn point.

Hoglins run away from respawn anchors. 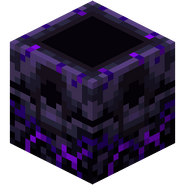 All 4 charged states of a Respawn Anchor.