Minecraft Wiki
Register
Don't have an account?
Sign In
Advertisement
in: Opaque Blocks, Renewable, Pages where template include size is exceeded,
and 4 more

For other sand-related objects in Minecraft, see Sand (Disambiguation).

Sandstone and Red Sandstone are naturally occurring blocks found in deserts and beaches.

Any type of sandstone can be mined with any pickaxe.

Regular sandstone generates a few meters below natural sand deposits, protecting the sand from falling into natural caves and ravines. Red sandstone will not generate beneath red sand, as orange terracotta does this instead.

Both smooth sandstone variants can be smelted into their respective sand variants.

Unlike sand, sandstone is unaffected by gravity.

Slabs, stairs, and walls can be crafted using either regular or red sandstone and some of its variants.

Sandstone requires a pickaxe to harvest, otherwise it will drop nothing.

Sandstone was first introduced in Beta 1.2. Two textures were added in release 1.2.1 in the terrain.png file and were not used for a few versions.

Desert temples were added in release 1.3.1, and use all three variants of sandstone. Sandstone stairs were also added in this release.

Red sandstone was added in release 1.8. 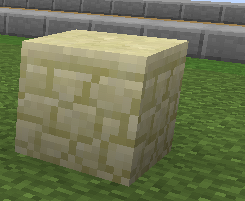