Despite being made out of iron, smelting shears in a Furnace/Blast Furnace will not result in Iron Nuggets.

Shears are the most efficient to acquire wool from a sheep. By using the shears via right-click, the player can acquire 1 to 3 wool blocks. The same sheep can be sheared again after it eats from a Grass Block to regenerate its wool.

Shearing a Mooshroom drops five mushrooms of the same color and turns it into a normal cow.

Shearing a Pumpkin yields some pumpkin seeds and creates a carved pumpkin.

Shearing either a beehive or bee nest at honey level 5 drops 3 honeycombs. This does not break the hive or nest.

Shears can receive four enchantments in Java Edition: Efficiency, Unbreaking, Mending, and Curse of Vanishing. In Bedrock Edition, Silk Touch can be added as well as the other four enchantments. 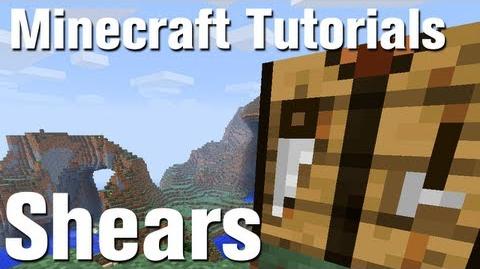 Minecraft Tutorial How to Make shears in Minecraft