minecraft:shield
The Shield is a Minecraft defensive tool that has replaced blocking with swords as of 1.9 for the Java Edition and 1.10 for the Bedrock Edition. Only one type of shield currently exists; however, it is possible to customize a shield using a banner only in Java Edition. Banner patterns are not proportionate to the shield, so the design will display on the shield differently than on the banner. Adding a banner pattern to a shield does not affect the function of the shield.

Shields are commonly placed in the off-hand slot. Once equipped, a player can right-click[Java Edition only] or crouch[Bedrock Edition only] to raise the shield and block incoming attacks(100%) from enemy mobs or players. Attacks coming from within a 180° radius in front of a player will be negated, with an exception being Redstone-activated TNT. It is possible to deflect arrows with a shield, directing them back at the enemy who fired said arrow, making it both a defensive and offensive tool. But a crossbow with the piercing enchantment will pierce through the shield and hit you, and a bow with the flame enchantment will still make you catch on fire as will tipped arrows which will still give you the effect.  A player's movement speed is decreased while the shield is raised. When a shield is being used and is attacked by an axe, there is a 25% chance that the shield will be deactivated[Java Edition only] for five seconds (as seen by a white overlay, similar to Ender Pearls and chorus fruit), plus 5% for every level of efficiency on the axe, and always 100% if the axe-wielder is sprinting.

Shields, being easily craftable early game, can be used to fight mobs and clear dungeons, raids, or caves. Being able to negate all damage from common mobs, including creepers, without losing much durability, shields decrease the need for armor. Keep in mind shields can be disabled by vindicators for a few seconds though.

Shields are useful in PvP too, especially when fighting someone with a ranged weapon (like a bow or crossbow). If a player is well experienced using a shield, shields can help the player win a PVP fight. Just be aware that if a player has an axe equipped, they can disable the shield. Blocking attacks while being cornered is a good way to ensure safety, and can give some time for the cornered player to recover. Take note that shields will not protect players against some attacks like fire. In Bedrock Edition, the player might have a disadvantage in blocking because they have to crouch to block an attack, lowering their movement speed, so its best to use this for defensive purposes.

When the shield blocks an attack of 4 (

) or stronger, it takes damage equal to the strength of the attack, plus 1. 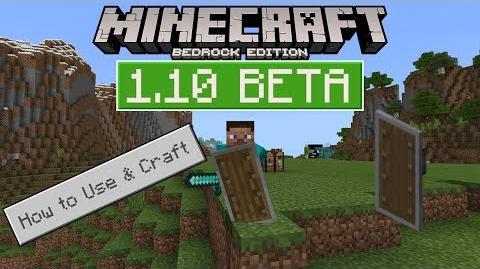 How to Use & Craft- Shields in Minecraft Bedrock Edition - Full Explanation
Community content is available under CC-BY-SA unless otherwise noted.
Advertisement