Minecraft Wiki
Register
Don't have an account?
Sign In
Advertisement
in: Opaque Blocks, Renewable, Pages where template include size is exceeded,
and 11 more

A smoker is a utility block that provides players with a faster option for cooking Food.

A smoker can be used to cook food twice as fast as a regular Furnace. It has no effect on anything other than Food items. Smokers emit a light level of 13 when active, similar to normal furnaces. If a Village has a smoker but no butcher, then any Villager without a profession has a chance to become a butcher. Smokers can't be pushed by Pistons.

A smoker can be found within certain buildings in Villages that generate after the 1.14 update. They can also be crafted by players using the recipe below.

The smoker requires 4 logs of any type and one furnace.

The smoker was originally added in Snapshot 18w44a, but was non-functional. Later, in snapshot 18w50a, it gained its functionality, allowing players to use it for cooking. 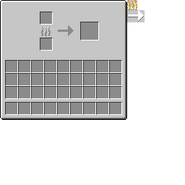 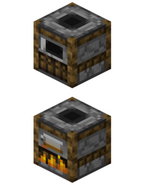 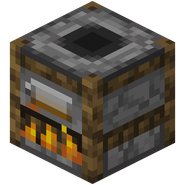 An active smoker without being animated.