For other articles related to snow, see Snow (Disambiguation).

A snowball is (usually) a harmless item that players can throw as a projectile. Back in 1.13 you could throw and barely harm people. But, it would still make someone take damage.

Snowballs can be obtained by using a shovel on snow or snow blocks. They also drop when a snow golem is killed.

Snowballs can further be crafted into snow/snow blocks if desired.

Snowballs are useless in combat except for fighting blazes and the Ender Dragon, but it only does 2-3 hearts of damage. Seven well-aimed snowballs can kill a blaze. When a snowball makes contact with a target, it has a knockback effect that is equivalent to the knockback I enchantment. They can, therefore, be useful to knock a mob or player off a cliff, into a trap, lava, or other hazards. They can also be used to temporarily keep enemies away, by repeatedly knocking them back. Although snowballs do not deal damage specifically to players, they do wear down armor durability, unless it has unbreaking.

Like arrows, chicken eggs, fire charges, and spawn eggs, snowballs can be fired from dispensers, however, they do not collide with the player. They also do not deal knockback to any mobs when shot this way but will still damage blazes. 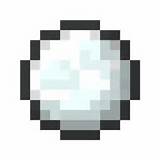 Snowball (dropped by snow golems when they die.)

Snowballs used in a popular minigame 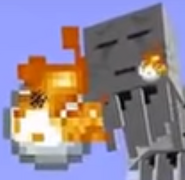