Light level that is less than 7, on solids.

Spiders are neutral mobs which can spawn in clusters of 1–4. They can be ridden by Wither Skeletons and/or Skeletons.

Spiders move slightly faster than other hostile mobs, making creeping noises as they move around. They are aggressive at night, attacking nearby players, but neutral during daytime. However, a spider will always attack any player who provokes them, regardless of the time of day. Spiders will perform a leap attack at a player when close enough. They make an audible sound similar to a loud hissing. Unlike the other mobs that spawn during the night, spiders can see through every block, which makes them particularly dangerous to players. This and their unique climbing skills make them one of the greatest risks to players who are active during the night (especially in a shelter, where spiders can sneak onto a roof or over walls, to reach a player). Unlike most other mobs, spiders can move easily through cobwebs.

A spider is two blocks wide and almost one block tall, allowing it to fit through spaces that most other mobs can't.

If a spider survives until daytime without becoming hostile, it will remain neutral, ignoring a player unless attacked. On rare occasions, skeletons can be seen riding a spider, creating a spider jockey. Despite this combination, they are still considered separate mobs, with their weaknesses.

Spiders can be irritating creatures during the first few days in Survival mode. Players who do not acquire supplies fast enough may be left without a roof on their shelter. Due to spiders' climbing abilities, roofs are imperative when creating a shelter. However, players can create overhangs around their buildings, preventing the spider from climbing over. It is also possible to make a wall that spiders cannot climb over by placing a fence with any type of slab on top. It can be considered a bug, but it works.

Despite making noises, spiders can be difficult enemies to combat in low light due to their hue, which is so dark that sometimes the only way to differentiate a spider between darkness is by looking at its glowing, red eyes. Combating spiders with melee weapons can also be tricky due to their speed, although a diamond sword deals enough damage to kill a spider with two blows. It is also worth mentioning that spiders are best tackled with a bow and arrows, as they will not become hostile toward a player if they are at least 10 or more blocks away.

If engaged in combat from a short-range, attacking from one block below is an efficient strategy. Spiders only deal damage when their Y-axis position is changed. When a player is at the same level as a spider, they are less likely to be hit. This will also give a player a straight shot towards a spider and provides more accuracy against their erratic movements. If a player is not prepared for a battle and has nothing but a sword, axe, a fist, or any item that deals damage, the spider can be killed whenever it comes close. Make sure there are no other hostile mobs around that could be distracting. Should this fail, and a player has low health while the spider is coming at an unfortunate angle, retreat by sprinting and getting out of the spider's reach.

Once a spider leaps onto a player, they can jump while walking backward, then attack and repeat this technique.

Regular spiders are very common at night and can climb walls. They will spawn in areas with a light level lower than 7 (in caves, and at night). Occasionally, a Spider can spawn with a Skeleton/Stray riding on its back, forming a jockey. The same will also apply for Wither Skeletons, but if spawned in the Nether.

Cave Spiders can only spawn through spawners that generate naturally in the abandoned mineshaft. They are dark blue, smaller, and inflict poison on the player. Like regular spiders, Cave Spiders have the same drops, make the same sounds, and are neutral. They do however have lower heath. In the Bedrock Edition, cave spider jockeys exist as well. 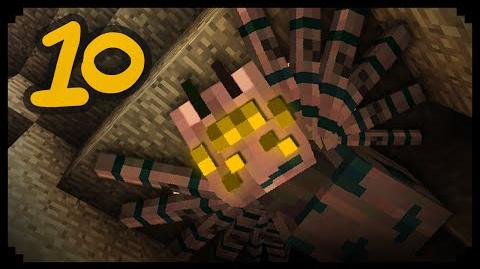 ✔ Minecraft 10 Things You Didn't Know About the Spider