For a similar mob which glows, see Glow Squid.

Any depth of water, any light level.

minecraft:squid
Squid are eight-limbed, passive aquatic mobs that can be found in Water in any depth of all Biomes, spawning on any Difficulty. Squids were the first water-dwelling mob to appear in Minecraft, the others being the Guardian, Elder Guardian, all the different types of fish, Dolphins, and Turtles.

These mobs can survive even in a block of water. When moving about, the squid's tentacles will open and close, giving them the appearance of pushing themselves through the water, which they will do slowly. Squids do not take an exact path of travel, and they will make no attempt to interact with a player. Squids become immobile when they become beached, also taking damage over time as they are out of water. They can take fall damage and burn like any land mob, but they cannot drown. Squids behave like other passive mobs and can despawn over time. If a squid is killed, it will drop one to three Ink Sacs. Squids will occasionally find their way up to the surface of the water. This can kill them, however, if they do not find their way back to the lower depths. Squids are extremely knockback resistant on land. As of 1.13 - The Update Aquatic, squids will shoot ink when attacked. 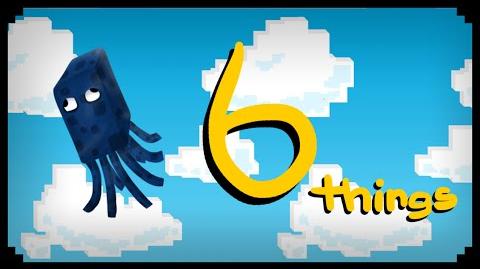 ✔ Minecraft 6 Things You Didn't Know About the Squid