The Indev House was added in Indev. When Indev was started, players were greeted with the newly added title screen, and the options to create a map or load a previous map. When creating a map, players had to assign four characteristics to their maps: the type, the shape, the size and the theme. The map would then be created and spawn them in an "Indev House". An Indev house was a 7×7×4 structure with a 1×2 hole for players to exit and two torches on the interior. The House would be formed around a player's spawn point. An Indev house began made of mossy cobblestone (which was unavailable naturally on the map anywhere else) and chests filled with TNT, a full stack (99 at the time) of every type of block and every type of item. As Indev progressed from testing items and blocks to testing the actual survival aspect, these chests were removed. Later still, the design of the house was changed. The floor was made stone and the walls and roof were made of oak planks. 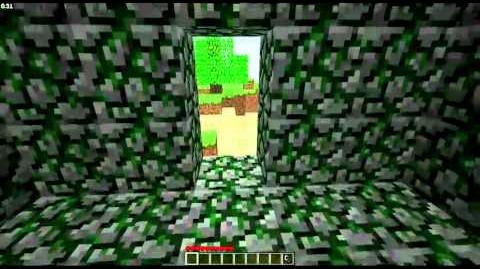