minecraft:vex
A Vex is a small, flying, hostile mob that can be summoned by an evoker.

Vexes are one of only two flying hostile mobs that can spawn in the Overworld, the other being the phantom. They are immune to damage from falling, drowning, fire, and lava. They only take damage from swords, bows and arrows, and the player's hand. Vexes are not hindered by solid blocks in any way, allowing them to fly through walls, floors, trees, or the ground itself. If the evoker spawns low enough, it is possible for a Vex to fly into the Void.

Vexes can be summoned by Evokers, an Illager found within woodland mansions, or during raids. Evokers lift their arms when threatened, emitting smoke to send out three Vexes at a time.

Vexes will attack villagers, iron golems, and players with their small iron sword. They will also attack mobs that the Evoker commands them to. When a Vex attacks, they glow red and lunge towards their target. When a Vex is idle, they float around their evoker.

The face texture of a vex. 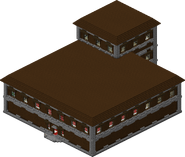 Where vexes can be spawned by Evokers, Woodland Mansions.