Minecraft Wiki
Register
Don't have an account?
Sign In
Advertisement
in: Not Stackable, Transparent Blocks, Pages where template include size is exceeded,
and 11 more

Water is the most familiar liquid block found in the Overworld. When it is allowed to flow freely, it flows seven blocks horizontally from its source, but it can flow downward infinitely. When water hits still lava, the lava block is turned into obsidian. On the other hand, when flowing water hits flowing lava, cobblestone is created, whereas when still water is touched by flowing lava, stone is created. Players can utilize this to make "cobblestone/stone/obsidian generators", and make their blocks. If water is placed in the Nether via bucket, it will instantly be removed, making a black puff of smoke, though there is a glitch where one can place water in a cauldron in the Nether.

Some mobs can be drowned in water. This can be utilized strategically in traps. Water traps are most noted to be used against zombie pigmen. However, this trap can work on creepers. This is because water can also be used to prevent creepers from destroying any land or building. After all, explosions do not destroy blocks in water (they still damage entities). Certain mobs show an odd fondness towards the water, these mobs being the general peaceful mobs, such as pigs and chickens. Groups of pigs can be found bobbing in water, and the occasional chicken is seen floating in the water as well.

Water is also an important part of farming, considering that wheat, sugar cane, pumpkins and melons all require water to grow.

A player can swim through the water when it is in the form of a large entity, such as an ocean or lake. When a player enters a body of water and submerges completely, a row of small bubbles will appear just above their hunger bar (beside the health bar in PE). This signifies a player's oxygen level. If a player stays underwater too long and the oxygen meter runs out, they will begin to drown. When drowning, a player steadily takes damage, and it is more difficult to surface, so this makes drowning a very irritating way to die. A player is slower to mine blocks in water: if floating, it takes 5 times longer, and if submerged, it also takes 5 times longer; when both of the aforementioned penalties apply, it is a 25x mining speed penalty.

Squids, dolphins, fish and drowned are often found in bodies of water, and fish can be eventually caught while fishing from any mass of water, big or small.

Water's effect on players (and mobs) can be affected by enchantments and status effects:

Water resists all types of explosions, including blasts from TNT. However, when TNT detonates underwater, the ground below it will be destroyed. This will cause the water to fall in and create unfilled areas, otherwise creating a vortex above-water that can be difficult to escape. 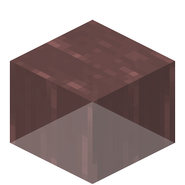 Red Nether water. This goes unused as water cannot be placed in the nether 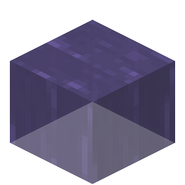 Purple water in The End.