minecraft:witch
A Witch is a ranged mob added in 1.4.2 - The Pretty Scary Update.[1] Witches are hostile and are found mostly in swamp biomes wandering around their houses. When a witch gets hit by a player, they begin to viciously attack them with splash potions. Witches also can regenerate health. It fires splash potions of weakness, slowness, poison, and instant harming to weaken a player so it makes it easier to attack a player. Because of this, a player's armor is rendered useless, regardless of the armor's material and/or enchantments.

Since 1.7.2, witches now spawn naturally, though they are rarer than Endermen. Before this update, they could only be found in witch huts. They also spawn when a villager is struck with lightning.

A witch relies on using harmful potions, such as poison, for ranged attack. The best way to fight a witch is to get in close and not let it get away. Keep hitting it, and they will fall quickly. Damage must be consistently dealt to a witch to kill it, as it can use healing potions to regenerate health.

Another effective way is to take it out with a bow, as a player will outrange the witch's splash potions. As with melee fighting, a constant barrage of arrows must be maintained to ensure the witch cannot continually drink health potions. 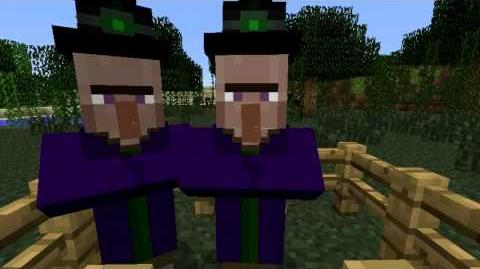