A Wither Rose is a unique flower with negative properties. Any player or mob that touches it will be granted the wither effect, a status effect similar to poison. This is the same status effect inflicted by Wither skeletons and Withers. They are good in traps as the wither effect helps in killing enemies and allies alike. They are also used in many auto-killer farms.

Wither Roses cannot be obtained when playing on the peaceful difficulty in Survival. They can only be obtained either from the Creative inventory or when the Wither kills a mob (depending on the location the mob was when it was killed by the Wither). As long as cheats are enabled, it can be obtained via commands using /give [playername] wither_rose [quantity of item].

Wither Roses can be used as traps, as they can be placed on any solid block (with a few exceptions). The wither rose can also be placed around a player's base as a defense against other players and unwelcome mobs, and also can be used as a prank against enemy players.

Wither Roses may possibly be used as a semi-automatic mob farm, since entities take damage when walking through the Roses. Oddly enough, these Roses can still be pollinated and bred to bees. While feeding the bees, the flower itself will not have any effect, but they will still get damaged from the Rose when pollinating it.

A creeper being withered by Wither Roses. 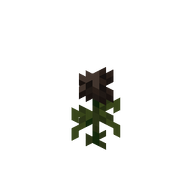 Wither Roses in a desert.

A Wither Rose in the Nether.