minecraft:wolf
Wolves are the deuteragonists in Minecraft. They are a type of neutral tameable animal mob that can spawn in the forest, ice plains, and taiga biomes, often near mountain biomes.

Wolves are initially neutral, but if they are attacked, all of the wolves in the immediate area will become hostile towards the attacker. Their eyes will turn red, their tail raises, their mouth raises, and they will attack the player who attacked them. If all of the players leave the game in an SMP server, at their return, all hostile wolves will be passive. However, the hostile texture will remain, so they cannot be tamed.

A tamed wolf will only attack mobs (except creepers) that are attacking or were attacked by its owner while wild wolves will naturally attack sheep, rabbits, tamed wolves, foxes, llamas, witches, evokers, baby turtles, and skeletons. They sometimes kill each other. When a wolf takes damage, its tail will lower, and it will show its current health. Tamed wolves can be right-clicked to make them sit or stand. When sitting, they will stay in the same place unless their owner is attacked in which case they will instantly teleport to the owner. When standing, they will wander around within a certain range of their owner, and they will teleport to their owner if they get too far away. Like a canine would do in real life, a wolf will shake its body to dry off after coming in contact with water.

Passive to their owner
Neutral to other players

Right Clicking a wolf with bones

A player can tame a wolf by right-clicking (PC/Windows10), holding down the action button (Pocket Edition), or using the right trigger (Console Editions) while a bone is held in a player's hand. It could take anywhere from 1-6 bones before a wolf becomes tamed. Black particles will appear each time a player feeds the wolf a bone. When these turn to heart particles and a red collar appears around the wolf's neck, it has been tamed. This collar can be re-colored using dyes. Aggressive wolves cannot be tamed until they become neutral again. Taming a wolf in Pocket Edition can be very difficult, as players risk hitting the wolf and making it hostile. Be sure to hold the action button down on top of the wolf instead of "poking" it. Sometimes, it takes a few tries before they are finally tamed.

Wolves can be bred by feeding 2 adult wolves a piece of any type of raw meat (including rotten flesh). If a player holds a piece of meat (or a Bone, although a tamed wolf cannot be fed bones) within a certain range of a wolf, it will tilt its head and beg for it. A player can then feed it the meat to engage "Love Mode". Tamed wolves can be fed any type of meat to heal them, and while untamed wolves can be fed, only tamed wolves can be bred. When a wolf pup first appears it's at low health so it's probably best to feed them before taking them on an adventure. Wolf pups take 20 minutes to grow to an adult, so about 2 Minecraft days.

Wolves were introduced in the Beta 1.4 patch, but it was not until 1.1.0. that the breeding mechanic was added, and not until 1.4 that their collars could be dyed. Wolves existed in TU1 in Console editions and were added to Pocket Edition in 0.9.0. 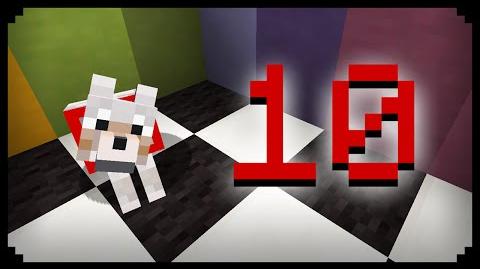 ✔ Minecraft 10 Things You Didn't Know About the Wolf