For articles on other pig-like creatures, see Pigs (Disambiguation).

Zoglins are hostile mobs created when a hoglin is brought into the Overworld, at which point it becomes zombified. They were introduced in Java Edition 1.16 snapshot 20w14a. It will attack most mobs except for creepers and other zoglins and ghasts.

If a Hoglin is in the Overworld or The End for over 15 seconds (300 ticks), it will zombify. Zoglin despawns if the difficulty is Peaceful [Java Edition only]. In Bedrock Edition, zoglin exists within the world but remain hostile. When Tamed, Zoglins attacks Llamas and any Mountains Biome living mobs.

Zoglins naturally attack all nearby mobs except for creepers and other zoglins and ghasts. They will also cause piglins to flee if they are not in combat. Zoglin's attack flings the target into the air. Baby ones, however, don't have this ability.

Zoglins cannot be bred, and will ignore warped fungus, and are not repelled by blocks that repel hoglins. Unlike normal hoglins, baby zoglins attack baby piglins.

Zoglins upon death drops from 1 to 3 rotten flesh and 5 XP when killed. The maximum is increased by 1 with each level of Looting, with a maximum of 1-6 with looting III. In Bedrock Edition, adult zoglins drop 1-3 exp.

Is hostile and will attack pretty much anything upon sight.

From Baby Hoglins going into the Overworld .

The transformation from a hoglin into a zoglin. 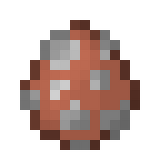 The spawn egg for the zoglin.